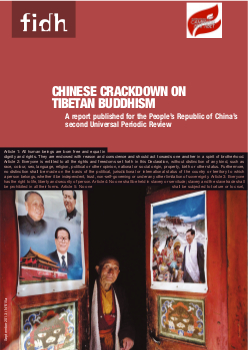 In a joint report published today for the People’s Republic of China’s second Universal Periodic Review, FIDH and ICT urge Chinese authorities to end their on-going crackdown on Tibetan Buddhism. The report highlights numerous violations of principles set in the Universal Declaration of Human Rights, as a result of increasingly systematic measures set by the government since 2008.

Following the overwhelmingly peaceful protests that swept across Tibet in March and April 2008, the most tragic evidence of the deteriorating environment for Tibetan Buddhism has been a wave of self-immolations, which has caused as of today more than 120 Tibetan deaths, including of students, monks, nuns, young mothers, farmers and nomads. Many of those who self-immolated clearly sought to underline the religious context of their acts: some have died with their hands clasped in prayer, while many self-immolated beside a stupa (reliquary building), a monastery or a nunnery.

“Tibetan political protest has been peaceful for decades, in spite of an ever-increasing pressure on all aspects of Tibetan culture and society. This unprecedented wave of self-immolations is certainly the result of a peak in Chinese crackdown on Tibetan Buddhism. The recent repressive measures combine propaganda, re-education, administrative regulation and punishment”, said Vincent Metten, ICT’s EU Policy Director.

ICT and FIDH report the following:

Tibetan religious activities and beliefs that are seen as posing a threat to the authority of the Party are criminalized and equated with “separatism”. This has already led to the arrest and detention of many Tibetans, including monks and nuns. FIDH and ICT are particularly concerned about the welfare and safety of three senior monks from Drepung monastery, who were detained in April 2008. Two of them have subsequently received life sentences, after hundreds of monks from the monastery were at the forefront of peaceful protests in Lhasa beginning on March 10, 2008.

“The PRC should allow all Tibetans, including monks and nuns, to exercise their cultural and religious rights without hindrance, re-assess policies that undermine Tibetan linguistic, religious, and cultural traditions, creating grievances and fostering unrest, and respect freedom of religion and belief for all” , said Karim Lahidji, FIDH president.

To read the French version of the report, please click here.

1. For further information see ICT’s reports “The Communist Party as Living Buddha”and“Storm in the Grasslands. Self-immolations in Tibet and Chinese policy”
2. For further information on the crackdown on Drepung monastery see ICT’s reports“Authorities acknowledge 4,000 detentions: thousands ‘disappear’ in ongoing Lhasa crackdown; Unrest at Drepung » and « Senior monk-scholars, with no political record, sentenced to life and 15-20 years imprisonment – crackdown continues at Drepung »