The Tibet Autonomous Region recently issued regulations encouraging Tibetans to spy on each other and on foreigners in the name of China’s national security.

The regulations, which tie into Chinese General Secretary Xi Jinping’s “Overall National Security Outlook,” are further proof that the Chinese Communist Party has given up on co-opting Tibetans and is now focused on coercing and silencing them to maintain political control. Although China has coerced Tibetans to spy on each other for decades, the regulations openly acknowledge and approve of the practice.

Chinese leaders’ strategic and deceptive use of language to cloak repressive policies is well documented in its domestic and international public relations. Evoking counter-espionage to drive people to spy on each other and report to the authorities is one example of this deceptive use of language. Translated interchangeably as counter-espionage or anti-espionage, the political term Fǎn jiàndié (jiàndié meaning “spy” in English and Fǎn equivalent to “counter” or “oppose” in English) connotes a defensive posture, but Fǎn jiàndié in reality is highly offensive and invasive. While the TAR counter-espionage regulations suggests that the party-state is merely reacting defensively to Tibetans threatening China’s stability and unity, both the national and local level “counter-espionage” regulations legally obligate everyone to be proactive and offensive in spying on each other and reporting to the authorities.

In response to a query by the International Campaign for Tibet on his reaction to the TAR Counter-espionage Law and the definition of “espionage” therein, former law lecturer at Peking University and Chinese legal activist Wang Tiancheng said:

“[T]he Counter-espionage Law gives security authorities arbitrary powers to handle all kinds of activities which they perceive as endangering national security including espionage. Their exercise of powers, including wiretapping, opening investigations, making detentions and arrests, and carrying out pre-trials, is not subject to judicial review.

The law and regulations do not provide for any mechanism to check the exercise of their powers. The Counter-Espionage Law treats espionage as one of activities which endanger national security and lists five types of espionage conduct [Article 38.1]. However, it does not define espionage in a way so that one can easily tell the difference between espionage and other types of conduct endangering national security.

Tibetans under Beijing’s rule are often required to report fellow Tibetans to the authorities as a test of their loyalty to China’s party-state. Chairman Mao Zedong’s decade-long Cultural Revolution mania was notorious for inciting and coercing Tibetans to spy on each other and report to party leaders to prove themselves as anti-bourgeoisie or to save themselves from the red guards’ sheer naked political violence. The new TAR regulations on counter-espionage provide for commendation and rewards for Tibetans who perform their legal obligations well in reporting fellow Tibetans (Article 8). Although reward of safety from the disbanded red guards is no longer an incentive, rewards in contemporary Tibet come in the form of access to jobs in the subsidized state sector, a ceremonial career in government or safety from harassment by law enforcement officers.

Through counter-espionage work, the party elite seek to mobilize the masses’ to support the mass line (qunchong luxian) of counter-espionage (Article 3). Mass line is a concept developed by Mao on his idea that the party can aggregate the interests of the people and persist in representing them and working on their behalf. The regulations purportedly strengthen the construction of national security and civil defense under the party and local government’s leadership by mobilizing the whole of society—citizens, communal organizations, enterprises, institutions, social organizations—to counter espionage (Article 2). The concept of mass line uses circular reasoning: The ruling party rules because, by definition, it is the incarnation of the will of the masses, yet the masses must be instructed what to think, through “public opinion guidance,” to ensure they support the mass line.

Pressure on individual Tibetans to report on their neighbors is intensified by the widespread use of surveillance technologies. If cameras and facial recognition algorithms pick up activity deemed suspicious, those who witnessed it, yet failed to report it, also fall under suspicion, and may face interrogation at length.

Especially vulnerable are those who have official dossiers alleging past “bad behavior.” They are under extra pressure, as one condition of release from detention is to report on their neighbors or face a return to prison.

For such Tibetans, the pressure is intolerable, since everyone in a Tibetan urban neighborhood knows this is standard practice, and so they tend to steer clear of those targeted by this unrelenting pressure to report. Those who have had troubling encounters with law enforcement are therefore ostracized by their own community and remain under intense pressure to deliver counter-intelligence.

Until recently the last remaining option for people excluded from Tibetan society and under pressure to spy was to flee abroad, but that option is now almost impossible.

In addition to imprisoning and shooting down fleeing Tibetans, Chinese security agencies have also employed the softer tactic of incentivizing border area Tibetans with monetary rewards for reporting on escaping Tibetans. The tightening of such measures after the 2008 uprising in Tibet drastically curbed the exodus of fleeing Tibetans and, with that, their stories of living under the party’s rule. Prior to 2008, the annual exodus of Tibetans averaged around 2,500. The figures have dropped dramatically since then. Only 18 Tibetan refugees were able to escape in 2019, according to sources in the Central Tibetan Administration who monitor such affairs.

With the Tibet Autonomous Region sharing borders with multiple Asian countries—India, Bhutan, Nepal and Myanmar—Chinese authorities use the Tibetan inhabitants of the border areas as a civilian frontline of defense and the focus of military-civilian integration.

The fatal India-China clash along the Ladakh border in June 2020 brought into the spotlight the Chinese authorities’ border security strategies mobilizing border-area Tibetans. While Chinese state media did not explicitly name India, the creation of militias appears to be posturing against India. From the perspective of the CCP leaders, India would mobilize Tibetans towards independence to split the PRC. 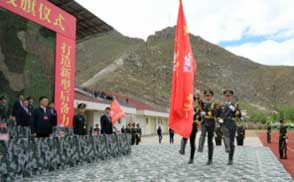 Chapter III of the TAR regulations, titled “Publicity and Education” (Article 23-28), requires propaganda on “counter-espionage” to reach every corner of society. The national security programming of school children must incorporate “counter-espionage” security knowledge into education and teaching content (Article 25). Both print and digital state-controlled mass media and internet service providers are tasked to carry out “counter-espionage” propaganda in the form of advertisements, videos and other propaganda materials (Article 28). Village committees are supposed to be guided to carry out mass “education work” in their villages. In other words, the village committees are tasked with propaganda work within the villages (Article 10 and 23).

When asked about the impact of the new TAR counter-espionage regulations on human rights of the Tibetans in Beijing ruled Tibet, eminent Chinese legal scholar Teng Biao told the International Campaign for Tibet:

“[T]he TAR’s counter-espionage security regulation will put ordinary Tibetans in danger. It will set off a wave of political campaigns suppressing free speech and religious freedom. The counter-espionage regulation and its implementation will worsen the human rights situation in Tibet which has been tragic already.”