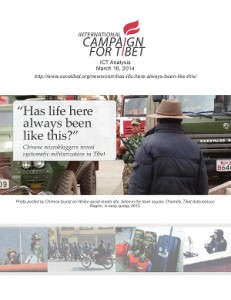 Chinese travelers to Tibet are revealing the extent of the militarization and repression inside Tibet that the Chinese government is attempting to cover up through propaganda and censorship, according to a ground-breaking report released by the International Campaign for Tibet on the 55th anniversary of the 1959 uprising and the 2008 protests in Tibet.

“Chinese tourists are exposing the harsh truth of life in Tibet and undermining the peaceful narrative portrayed by Party propaganda,” said Matteo Mecacci, President of the International Campaign for Tibet. “The Internet postings of Chinese travelers provide an undistorted window into the smothering security apparatus imposed on Tibetan communities. Social media in China, which is facing increasing restrictions, is providing a useful tool to document the tense reality in Tibet and get around the government’s censorship regulations.”

ICT collected hundreds of images and messages from the Chinese microblogging site Sina Weibo, which enabled use of the crowd-sourced perspective of Chinese tourists to document conditions inside Tibet. ICT’s analysis of these messages finds that:

Chinese state-run media has sought to portray Tibet as idyllic and Tibetans as tranquil and grateful. To aid this narrative, Chinese authorities severely restrict access by foreigners to Tibetan areas. Foreign travelers have been forbidden to enter the Tibetan Autonomous Region since February, in an annual blackout to coincide with the ‘sensitive’ anniversaries in March, including March 10, the day Tibetans designate as their National Day to commemorate the flight of the Dalai Lama into exile following the People’s Liberation Army’s attack on the Potala Palace in Lhasa.

As noted in the report, domestic tourists from Chinese areas of the PRC are not subject to the same travel restrictions. Thus, their postings on Weibo provide documentation of the reality on Tibet that diverges from the official narrative on Tibet.