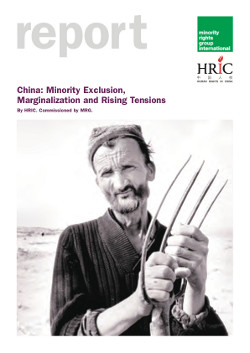 China’s massive economic development strategy, touted to benefit rural ethnic groups in its western regions, in practice excludes, marginalizes, and masks the increased repression of ethnic minority groups such as Mongols, Tibetans, and Uyghurs, according to a new report by Minority Rights Group International (MRG) and Human Rights in China (HRIC).

The report examines China’s autonomy system, and how despite formal guarantees of self-governance and minority protections for ethnic groups, the system functions as a mechanism of exclusion and control. Systemic violations of civil and political rights occur in tandem with increasing exclusion of ethnic minorities from a top-down policy of economic development, especially evident in Mongolian, Tibetan, and Uyghur autonomous regions.  Instead of benefiting the rural ethnic minorities, China’s economic development strategy implements a politicized policy agenda of resource extraction, assimilation through population transfers and militarization.