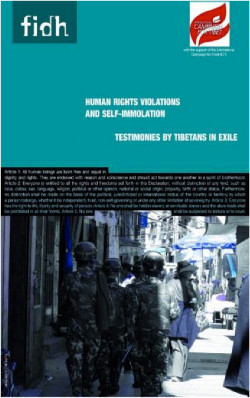 Fifty years after the brutal crackdown that lead the Dalai Lama and tens of thousands of Tibetans to escape from Tibet to India, the self-immolation of a young Tibetan monk from Kirti Monastery in Sichuan Province on 27 February 2009 marked the beginning of a new form of protest against the severe repression imposed by the People’s Republic of China (PRC) on the people of Tibet. Between 16 March 2011 and 20 April 2012, the self-immolation of 34 more people, most of whom died, has revealed the degree of tension that prevails in the region. It also overwhelmingly suggests that the PRC’s policy for dealing with the Tibet question has failed.
This report, prepared by the International Federation for Human Rights (FIDH) in partnership with the International Campaign for Tibet (ICT), presents a selection of six testimonies from Tibetan asylum seekers in Europe. The testimonies are based on thirty interviews carried out by FIDH throughout 2011 in Belgium, France and Switzerland – the three European countries hosting the largest number of Tibetans.
It aims to contribute to documenting human rights violations in Tibet in a context where independent observers, foreign researchers, human rights activists and journalists are not allowed to operate in the country.