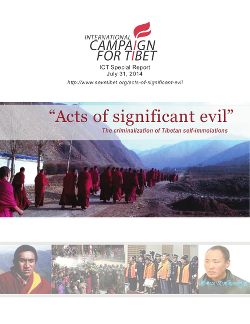 Chinese Communist Party has responded to Tibetan self-immolations with an intensified wave of repression that has led to the convictions, detention without trial, or disappearance of at least 98 Tibetans by using a quasi-legal framework to criminalize them.

A new report by the International Campaign for Tibet (ICT) documents the impact of rulings announced in December 2012, a month after Xi Jinping became head of the Chinese Communist Party. The new measures, adopted in response to self-immolations across Tibet (now totalling 131), have resulted in a spike in political imprisonments, including one instance of the death penalty, and numerous cases of Tibetans being ‘disappeared’, with family and friends unaware of whether or not they are still alive, often for weeks or months.

Matteo Mecacci, President of the International Campaign for Tibet, said: “These chilling new measures have resulted in the imprisonment of innocent Tibetans and should serve as a wake-up call to world’s governments. The Chinese government is resorting to unacceptable forms of collective punishment to stifle dissent in Tibet. It uses pseudo-legal language without legal basis, instead based on propaganda, misinformation and denial of reality to punish the relatives and friends of the self-immolators”.

The new report, “Acts of significant evil – The criminalisation of Tibetan self-immolations” finds that:

In response to these new measures and their questionable legality under international and Chinese law, ICT recommends that: