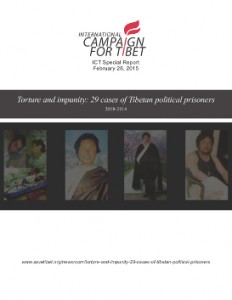 A new report by the International Campaign for Tibet documents a pattern of torture and mistreatment by Chinese prison officials of Tibetans, including 14 of them who have died, as a consequence, between 2009 and 2014.

This report, “Torture and Impunity – 29 Cases of Tibetan Political Prisoners” details specific cases of the 14 Tibetans, from an educated Tibetan in his early forties to a Buddhist teacher, who died as a result of torture in custody as well as the 15 others who survived but are still suffering. It also details the impact of imprisonment – whether extra-judicial, interrogation or a formal sentence – on the lives of Tibetan political prisoners released over the past two years whose ordeals have become known to the outside world, despite rigorous controls on information flow.

Matteo Mecacci, President of the International Campaign for Tibet, said:

“This report documents that since the unrest and crackdown in 2008, torture appears to have become more widespread and directed at a broader sector of society in Tibet. In particular, a younger generation of Tibetans is paying a high price with their lives for peacefully expressing their views about the oppressive policies implemented by the Chinese Government. Almost any expression of Tibetan identity not directly sanctioned by the state can now be characterized as ‘reactionary’, ‘splittist’, and therefore ‘criminal.’”

“Democratic Governments and the international community cannot turn their head away from this systematic abuses and must make China accountable to its international obligations, if a hope to see China reforming is to be seriously pursued,” he added.

Torture is endemic in Tibet’s judicial and law enforcement system, a result both of a political emphasis on ensuring ‘stability’ and a culture of impunity imposed from the highest levels of the Chinese leadership.

For Tibetans, it is important that these accounts are known outside Tibet. Before he died following torture and malnourishment in prison, 43-year old Goshul Lobsang expressed his wish for a blessing from the Dalai Lama, and also said that he wanted to let the outside world know about the lives of Tibetan political prisoners under Chinese oppression. He passed away in March (2014); Tibetan sources said that: “[At the end] he could not say anything, but simply folded his hands and died.”

The International Campaign for Tibet (ICT) is deeply concerned about the spike in political imprisonment and the endemic torture of Tibetans in contravention of both Chinese and international law. While there are legal safeguards in Chinese law against enforced disappearance, torture and medical access for detainees, these measures are routinely ignored by the Chinese authorities.

The report asks China to conduct an inquiry into the cases of custodial deaths and extra-judicial killings detailed in this report and bring those responsible to justice.

It also calls on China to: