After China’s top leaders pledged to continue their policy of absolute control and assimilation of Tibetans at a high-level meeting last month in Beijing, Chinese officials have now taken that message to Tibet.

Additionally, in the Tibet Autonomous Region and two other Tibetan areas Yunnan and Gansu, workshops have been organized to “study the spirit of the 7th Central Tibet Work Forum.”

The dominant theme in all these meetings was “the importance of efforts to grasp the guiding principles” of the forum and implementing them “as their primary political task at present and in the future.” 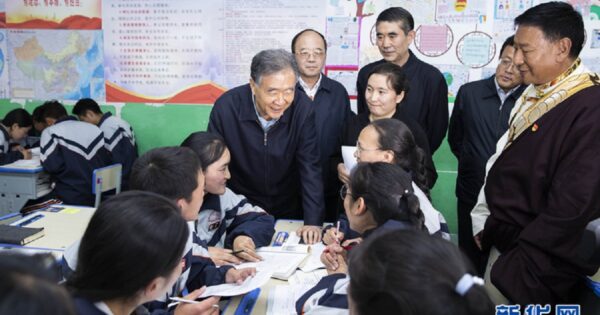 Wang paid a two-day visit to Qinghai province on Sept. 14-15, 2020, during which he visited Golok (Chinese: Guolou) Tibetan Autonomous Prefecture and toured a school for nationalities, a poverty alleviation project, religious institutions and TV and radio stations.

He met with staff of the prefectural people’s congress, political consultative conference, United Front Work Department as well as officials handling religious affairs. He also held a symposium in the prefecture. Qinghai is composed of traditional Amdo and Kham regions of Tibet.

On the same two days, You Quan visited Sichuan province and had discussions with provincial party and government leaders. He visited institutions in the city of Chengdu, including a minority legal aid service center.

Interestingly, state media reported that Sithar, a Tibetan who is a senior party official and currently the deputy director of the Office of the Central Tibet Work Coordination Group, accompanied You for the Sichuan trip. Sithar was formerly a deputy minister in the Central United Front Work Department and played an integral role on the Chinese government team during the 2002-2010 dialogue process with envoys of the Dalai Lama.

Also attending the meetings in Sichuan was Deng Xiaogang, deputy party secretary of the Sichuan Party Committee, who had served in the same position in the TAR from 2013-17. Deng has been particularly associated with the security crackdown in the TAR during his stint there. Sichuan has two prefectures, Kardze (Ganzi) and Ngaba (Aba), that along with Muli county in Liangshan Yi Autonomous Prefecture, are part of the traditional Kham and Amdo regions of Tibet.

In Yunnan, the provincial United Front Work Department convened a meeting of the Tibetan Buddhist community on Sept. 13 in Kunming. Zhang Guohua, member of the Standing Committee of the Provincial Party Committee and minister of the Yunnan United Front Work Department, asked the Tibetans to “study and implement the spirit of” the Tibet Work Forum and specifically highlighted “the important speech of General Secretary Xi Jinping.” Yunnan has one prefecture, Dechen (Diqing) Tibetan Autonomous Prefecture, that is traditionally part of the Kham region of Tibet.

In Gansu, Governor Tang Renjian presided over a meeting on Sept. 2 to study the spirit of the forum. Chinese state media said, “The meeting emphasized that General Secretary Xi Jinping’s important speech at the Seventh Central Tibet Work Forum profoundly clarified the party’s strategy for governing Tibet in the new era and is a programmatic document guiding work in Tibet-related areas.” The Kanlho (Gannan) Tibetan Autonomous Prefecture in Gansu is traditionally part of the Amdo region of Tibet.

In the TAR, there have been a series of meetings during which officials have highlighted the importance of the seventh Tibet Work Forum.

At an event in the Tibetan capital of Lhasa on Sept. 4 to celebrate the 55th anniversary of the founding of the Tibet Autonomous Region, TAR Party Secretary Wu Yingjie highlighted the importance of the forum.

Chinese state media reported Wu as telling the gathering “that the seventh Tibet Work Symposium held by the Central Committee was based on the strategic and overall considerations of the Party Central Committee with Comrade Xi Jinping at the core.” Wu added, “It was specially convened to plan the promotion of Tibet work in the new era and draw the blueprint for a new socialist modernization of Tibet.”

Wu also acknowledged the strategic importance of Tibet to China by telling the meeting that the forum “fully demonstrates the important strategic position of Tibet work in the overall situation of the party and the country.”