A Tibetan man in his forties, Tsekho Tugchak, set fire to himself and died today (March 7) in Ngaba (Chinese: Aba), eastern Tibet, the first self-immolation in Tibet this year. It is the 153rd self-immolation in Tibet, and happens at a time of intense securitization across Tibet in the buildup to the sensitive anniversary of the March 10 Uprising in 1959, and the tenth anniversary 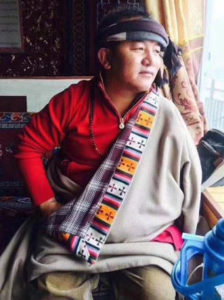 of protests that swept across Tibet in 2008 on the same date.

Graphic images circulated online of Tsekho Tugchak’s blackened body, lying on the ground, his arms outstretched. He was from a nomadic village in Meeruma township in Ngaba Tibetan and Qiang Autonomous Prefecture, Sichuan, the Tibetan area of Amdo. The last Tibetan to set fire to himself, Konpe, was also from Ngaba, and set himself on fire on December 23, 2017, close to the area of the first self-immolation in Tibet in February, 2009.[1]

Tseko Tugchak set fire to himself at a time of intensified military presence across Tibet. In the buildup to the March 10 anniversary, there has been a series of intimidating military drills across the plateau and the presence of massed ranks of troops in riot gear at peaceful prayer festivals.

Just three days ago on March 4 (2018), the Chinese authorities underlined how their strategies to prevent self-immolations rely upon oppressive measures. At a meeting in Chamdo (Chinese: Changdu or Qamdo) in the Tibet Autonomous Region, officials heard that in order to “prevent self immolations”, it is necessary for Party officials to maintain tough repressive measures already in place, and also to ensure “their absolute loyalty to the CPC Central Committee with Comrade Xi Jinping as the core”.[2]

Matteo Mecacci, President of the International Campaign for Tibet, said: “Since the wave of self-immolations in Tibet began in Ngaba, Tsekho Tugchak’s home area, the Chinese authorities have responded by intensifying the military buildup and repression. While the whole area is under lockdown and all Tibetans who dare to share information with the outside world are at risk of imprisonment, the reasons of Tseko’s self-immolation are not yet known. It is unthinkable that China can continue to block all independent investigations and requests of access to Tibet and impose a regime of fear and repression . On March 7, the UN High Commissioner for Human Rights Zeid Ra’ad Al Hussein denounced once again the Chinese Government’s failure to respect the rights of the Tibetan people. It is high time to hold the Chinese Government accountable for all 153 self-immolations that have taken place in Tibet since 2009.”

The presence of a senior Party official and massed ranks of troops at Kumbum monastery on March 2 (2018) at the same time as a prayer festival, the Monlam Chenmo, sent an uncompromising message on the Party’s tough line as the March 10 anniversary approaches.[3] It also underlined how in the current political climate, peaceful religious practice in Tibet is frequently conflated with threats to ‘national security’.

Wang Zhengsheng, head of the Public Security Bureau and Deputy Governor of Qinghai, chose the occasion of the prayer festival at Kumbum on March 2 to inspect troops, and “to study and instruct all aspects of security work and deployment” at the ancient Tibetan Buddhist monastery on March 2. The state media detailed Wang’s visit to the main square at Kumbum, making it clear that the purpose of the visit was not to admire the traditional butter sculpture but to view the “emergency deployment of police and soldiers on duty” as well as Party cadres, highlighting the Party’s “relentless struggle” in Tibet.[4]

Also this week the Chinese state media released images of military drills in Lhasa, Nagchu (Chinese: Naqu) and Lhokha (Chinese: Shannan) in the Tibet Autonomous Region, a ritualized display this year held in three different areas that has become an annual routine in the buildup to March 10.[5]

In Nagchu, Vice Executive Chair of the TAR Jiang Jie addressed troops in militaristic language, speaking about the need to “achieve decisive victory” in the war against “hostile elements”. Images posted on state media from the military exercises on March 4 showed massed ranks of troops and special forces, including the fire brigade, and armored vehicles.[6]

Jiang Jie stressed the need for “absolute loyalty” to Xi Jinping, and for troops to abide by his instructions to “safeguard the ‘northern Gate’ of the Tibet Autonomous Region”. He said that troops based in Tibet must “resolutely fight the people’s war, and build a strong wall of steel to fight against separatism.”

The ‘stability’ meeting in Chamdo this week, which highlighted the need for the Chinese authorities to prevent Tibetans setting themselves on fire, follows direct references to the wave of self-immolations across Tibet last year in Chamdo, and reveals how Party officials are instructed to regard these acts as those undertaken by “the enemy”. In the week of the buildup to March 10 in 2017, the Party Secretary of Chamdo City Norbu Dhondup stated that it was imperative to “knock down those who lead others to try to ‘become heroes’; and target those who come to be self-immolators, terrorists, and extremists; destroy illegal organizations; and highlight the dignity of our legal and socialist system. We should start to use every power: A hunting dog’s sense of smell, a bat’s sense of hearing, and a falcon’s ability to seize, so that we can fight strongly via intelligence and the internet to know [the enemy] before they take any action.”[8]

The language used in the state media indicates the more systematic approach of the CCP’s surveillance networks – in which even moderate and reasoned critique or expressions of cultural or religious identity can be characterized as the ‘enemy’ other, and as ‘splittist’ and criminal.

Since protests spread across Tibet a decade ago this week, the CCP has shifted from responding to incidents of protest and dissent, to new pre-emptive, more comprehensive steps of hyper-securitization involving thousands of Party cadres operating at a grass roots village level and more intensive ‘patriotic education’.

Footnotes:
[1] Konpe set fire to himself on December 23 (2017) and died the next day. In a harrowing video circulating online, a woman can be heard calling out, “Gyalwa Tenzin Gyatso [the Dalai Lama], grace us with your compassionate gaze.” International Campaign for Tibet report, December 27, 2017, ‘Young Tibetan man dies after self-immolation in Ngaba’, https://www.savetibet.org/young-tibetan-man-dies-after-self-immolation-in-ngaba/
[2] Tibet Daily, March 4, 2018, article entitled: ‘The autonomous regional stability supervision group supervised the maintenance of stability work in Changdu’, in Chinese at: http://www.gem.xizang.gov.cn/sy/xzxw/201803/t20180304_44796.html[3] For images, see International Campaign for Tibet report, ‘Images of repression and resilience in Tibet on day of miracles’, March 3, 2018, https://www.savetibet.org/images-of-repression-and-resilience-from-tibet-on-day-of-miracles/
[4] Extracts translated from the Chinese by ICT, March 3, 2018, http://epaper.tibet3.com/qhrb/html/2018-03/03/content_491108.htm
[5] International Campaign for Tibet report, ‘Wall of Steel in Tibet in major military drill in buildup to March 10 anniversary’, March 5, 2018, http://www.savetibet.org/wall-of-steel-in-tibet-with-major-military-drill-in-buildup-to-march-10-anniversary/
[6] Published by the Naqu Public Security Department on March 5, 2018, in Chinese at: http://www.xzgat.gov.cn/dsdt/11098.jhtml
[7] Chinese state media, March 3, 2018, http://www.xzsnw.com/gov/ldhd/137339.html
[8] Translation by ICT from the Chinese of an extract from the following state media report: http://sz.cdbao.cn/Html/2017-03-07/11764.html. International Campaign for Tibet report, ‘The four loves and the enemy within: new ideological campaign in Tibet reflects heightened agenda of control in 19th Party Congress year’, April 20, 2017, https://www.savetibet.org/ict-inside-tibet-the-four-loves-and-the-enemy-within-new-ideological-campaign-in-tibet-reflects-heightened-agenda-of-control-in-19th-party-congress-year/

By continuing to browse this site, you agree to our use of cookies.