A recent public notice explicitly dispelled the hype surrounding the well-known Larung Gar Buddhist Academy and the Nubzig (Ch: Luoruo) sky burial site, both in Serthar (Ch: Seda) County in eastern Tibet, as tourist attractions. The notice explicitly states that the Academy and the funeral site “are not tourist attractions” but stopped short of issuing an outright tourist ban to the two sites of Tibetan religious and cultural significance. The notice also reaffirms Larung Gar as a religious institute for training practitioners of the Nyingma school of Tibetan Buddhism, undertaking “normal” religious teachings and activities, as is required by Chinese law.

The notice was jointly issued by the Serthar Buddhist College, the Larung Gar Temple Management Committee, the Ethnic and Religious Affairs Bureau of Serthar County and the Serthar County Civil Affairs Bureau on 27 April 2021. The International Campaign for Tibet believes the notice is aimed at the Chinese tourism industry’s exoticization of Larung Gar Buddhist Academy and the Nubzig town sky burial site as mystical and exotic travel destinations for Chinese tourists. It appears to be a rare accommodation of resistance by the practitioners and the local community over the commercialization of Tibetan Buddhist culture.

Chinese authorities have increasingly used interest in Tibetan Buddhism to attract domestic tourists, leading to fears of a further decline of genuine monastic communities, popularly known as ‘encampments’ or chogars in Tibetan.

While the Tibetan Buddhist community in Serthar have been able to push back against the commercialization of Tibetan Buddhist culture, other challenges that limit the academic pursuits of the Tibetan Buddhist community persist. For example, on 8 May 2021, the Serthar Buddhist College announced the launch of a political education drive for party members, cadres, and monastic population of the Academy. The Academy’s party committee requires the monastic population to identify themselves with “the great motherland, the Chinese nation, Chinese culture, the Communist Party of China, and Socialism with Chinese characteristics”; captured by the political catchphrase the “five identifications”.

Founded in 1980 by the late Khenpo Jigme Phuntsok, Larung Gar Academy grew in size and reputation over the decades as the most important and influential training center worldwide for Tibetan Buddhism. In 2001, Chinese authorities forcibly downsized the Academy to close to half by demolishing the dwellings of the then estimated 8,000 monks and nuns, including Chinese practitioners. Larung Gar Academy bounced back from the demolitions in 2001, despite the death of Khenpo Jigme Phuntsok in January 2004. However, in 2016 and 2017, close to 5000 dwellings were demolished again, with the 10,000 resident population halved in accordance with a central government order; a copy of which was obtained and translated by Human Rights Watch. About 5,000 monks and nuns were evicted from the Academy. Evictees who were sent to their hometowns in the Tibet Autonomous Region were subjected to political re-education and public humiliation as evident in images and video clips of nuns in military garbs singing Chinese propaganda songs declaring that “The Tibetans and the Chinese are daughters of the same mother, the name of the mother is China,”.

In a rare step, in February 2017, six UN experts reported that they had made a joint submission to the People’s Republic of China stating that the developments at the Buddhist institute violate international human rights laws and “seem to be concerted attacks on tangible and intangible cultural heritage, which constitute serious violations of cultural rights of current and future generations.

The political education announced on 8 May and delivered at the Academy is part of the Party History Education campaign launched throughout Tibet and China in the lead up to the centennial anniversary of the Communist Party of China in July this year. At Larung Gar Buddhist Academy, the political education drive focuses on five themes:

Tourism and the museumification of Larung Gar

While Larung Gar Buddhist Academy attracts genuine Buddhist practitioners from the Chinese mainland and foreign countries, Chinese tourism to the Academy and the sky burial site as an exotic destination is a disturbing issue that practitioners have consistently complained about for decades.

A former student at Larung Gar who now lives in the United States told the International Campaign for Tibet:“The Khenpos (abbots) at Larung Gar have had been raising the chronic issue of tourists swarming to Larung Gar Academy for many years. They have had persistently pushed back against various attempts in the past to boost tourism to and to monetize off Larung Gar and the sky burial site. In that context, the authorities discouraging mass tourism is a positive development since it is a real problem.”

Jhator or ‘sky burial’ is the traditional Tibetan funeral practice in the cycle of life by offering a deceased body to the birds as an act of compassion–the most important virtue in Tibetan Buddhism–to sustain living beings. By ignoring the essence of Tibetan culture in a sky burial, funeral sites have become a spectacle for the intruding mass tourists from China, which is a chronic problem in Tibet. The funeral sites are routinely included as attraction sites in tour packages. For example, Guilin Outdoor Travel Club’s six-day tour itinerary during the Chinese Spring Festival included the following in their WeChat marketing material posted on 7 January 2020:Morning: Departure at 9:00, along National Highway 317, via Bhomda (Ch. Wengda), a short stop at Nubzig (Ch. Luoruo) Town, visit the sky burial platform (3900 meters above sea level) to explore the mystery of the sky burial in Tibet. Hundreds of vulture hover in the sky, leading the deceased to reborn in the Pure Land; it is very spectacular, and you can’t help but sigh life.

The same marketing material carries the reminder that “Filming is not allowed at the sky burial site, nor can you stay within the general area” but routinely ignored on the ground.

By not issuing a tourist ban to the sky burial site, the local authorities maintain a neutral position on the issue of tourists’ intrusion at Tibetan funeral site. The latest notice issued last month is an advisory reminding tourist that the Nubzig sky burial site is not a tourist attraction site. In one earlier notice issued on 4 February 2020, Civil Affairs Bureau of Pema (Ch:Banma) County in Golog Prefecture citing information received from their counterpart in Serthar County informed the public that the Nubzig sky burial site is temporarily closed due to the coronavirus outbreak and that the reopening of the site will be declared in a separate notice. This in effect clearly shows that Serthar County government controls the operation of the sky burial site. Despite its power, the Serthar county government stays clear of issuing an outright prohibition of tourists to the sites of Tibetan religious and cultural significance.

Stereotyping of Tibet and Tibetans in China

Tibet and Tibetans have long been stereotyped politically and socially as exotic, mystical, perpetually singing and dancing, pre-modern, barbaric, and secessionist under foreign influence. Such stereotyping in the eyes of an ordinary Chinese in mainland China is the effect of the government’s decades old propaganda and integration policies in Tibet as “China’s far west”. Neoliberal economic policies after China’s reform and opening have significantly led to the commodification and disneyfication of Tibetan land and people. Larung Gar Academy is one example of how stereotypes of Tibetan Buddhism as mystical and exotic result in superficial engagements with Tibetan culture. Shangrilization, both in literature and on the ground in the town of Shangri-la, is another example of stereotyping and commodification of Tibetan land and people in Yunnan province. In the recent past, a “pure smile” of a young Tibetan herder in Lithang went viral on Chinese social media Weibo in November 2020. A local state-owned Culture and Tour Investment Development company quickly recruited the 20-year-old herder as Lithang’s tourism ambassador. State media Xinhua declared that “Tamdrin has promised to be a diligent tourism promoter for his hometown”. Promotion of tourism and stereotyping of Tibet and Tibetans is a routine affair in the Communist Party of China controlled Tibet.

ICT translation of the notice 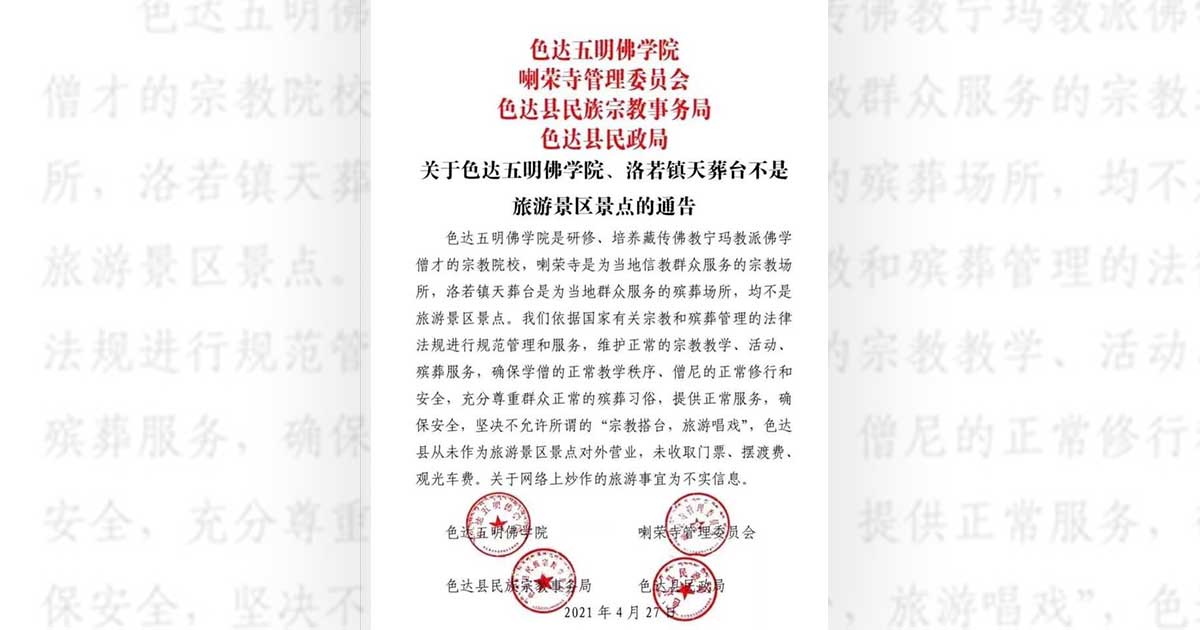 Serthar (Ch: Seda) Buddhist College is a religious academy for study and cultivation of Buddhist monks of the Nyingma School of Tibetan Buddhism. Larung (Ch: Larong) Monastery is a religious place for religious believers. The Nubzig (Ch: Luoruo) Town Sky Burial Site is a funeral and interment site for the local people. Both are not tourist attractions.

We conduct standardized management and services in accordance with national laws and regulations on religion and funeral management, maintain normal religious teaching, activities, and funeral services, ensure the normal teaching order of monks and nuns, the normal practice and safety of monks and nuns, and fully respect the normal funeral customs of the masses, provide normal services and ensure safety. Resolutely not allow the so-called “building a religious stage and playing a tourist opera on it”.

Serthar (Ch: Seda) County has never been opened as a tourist attraction, and it has not collected tickets, ferry fees, and sightseeing fares. The travel information hyped on the Internet is false information.